Many people really enjoy watching, feeding and learning about birds. This hobby offers one an opportunity to appreciate, delight, and connect to the natural world.

With its brilliant red feathers, head crest, black throat and face mask, the male northern cardinal is considered to be the most popular of all songbirds.  The female is light brown to pale yellow with reddish tinted wings, tail and head crest.

Cardinals live mainly in the eastern United States, from Canada all the way to the Gulf States.

Cardinals prefer to be fed from bird feeders that are about 4-6 feet high. They prefer the steadier, stationary feeders rather than hanging feeders. Cardinals also enjoy ground feeding.   The best wild bird food to provide for cardinal include black oil sunflower, buckwheat, black and gray stripe sunflower, and safflower seeds.  Cardinals usually are the first birds to feed in the morning and the last to feed at night.  Water also plays a very important part in attracting cardinals and other birds, both in summer and winter.  A bird bath is essential to keeping healthy populations of birds in your yard.

Cardinals do not migrate. Some tend to wander in the winter but few seldom fly more than a few miles from their nest. Since cardinals do not migrate, if you are able to establish a suitable habitat, you could have a cardinal family live in your yard for many years.   The female will nest two or three times a year in small trees, bushes, shrubs and thick vines at heights of three to eight feet.

The female cardinal will lay three or four eggs within a week of completing the nest. Cardinal eggs are glossy light green or dull gray, with reddish brown specks or blotches. The female incubates the eggs in solitude for 13 days before they hatch. Both parents share in feeding the nestlings until they leave the nest about 11 days later. At that point, the fledglings are covered with gray down.  When the cardinals have their young they will usually bring them to the cardinal feeder and teach them how to feed themselves. 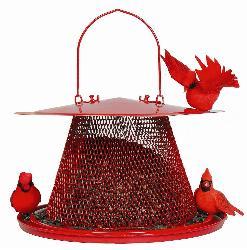