Written by Steven Musumeche
Over one million North Americans put up purple martin houses. Unfortunately, many of these folks are unable to attract breeding martins.

Many people really enjoy watching, feeding and learning about birds. This hobby offers one an opportunity to appreciate, delight, and connect to the natural world.

Purple martins are unusual in that they prefer living in colonies rather than in isolated pairs. This means that by providing a purple martin house, it is possible to be able to observe and enjoy these delightful members of the swallow family.  It is not uncommon to have multiple pairs of martins in your house.  These birds seem to be friendly around people.

Purple martins winter in South America.  In the spring they migrate to North America for the purpose of breeding.  Purple martins usually arrive in the southern states in February and in the northern states in early March. The male martins usually arrive well in advance of the females and apparently scout for available housing.   Martins do not begin their nest building for several weeks after the house and room selection is over.

Purple Martins are monogamous meaning that they pair for the breeding season. The male and female both contribute to the construction of the nest. Martins build their nest from twigs, grasses, straw, and mud.  Many enthusiasts maintain that having a source of mud near your martin house will add to the attractiveness of your 'property'.  The mud is used to 'cement' the nesting material together.

Attracting purple martins is a very popular hobby.  It is estimated that over one million North Americans put up purple martin houses.  Unfortunately, many of these folks are unable to attract breeding martins.  There are several common things that people do that hampers their success.

One reason people fail to attract purple martins is that they place their purple martin house improperly.  Martins must have adequate space around their house in order to fly freely within their territory.   The house should be placed in the center of an open area, Purple martins usually will not use housing obstructed by trees.  The trees should not be taller than the martin house.  Usually, the farther the housing is placed from trees, the more likely you are to attract these birds. Purple martin houses should be at least 50-60 feet away from trees, 15-25 feet off the ground, and at least 30 feet from human dwelling.

It is important that your martin house be lowered and cleaned each year.  Many enthusiasts removed old nesting material each year after the reproductive season is completed.  Care should be taken to destroy any insects that may have adopted your martin house.  Also, plug the entrance holes at the end of the season to prevent other birds such as sparrows and starlings from nesting.

Insects make up the bulk of a martins diet and they feed in flight. Their presence creates a form of natural insect control in your yard.  These swallows are very active and their metabolism requires the consumption of a large numbers of insects each day. Martins have been estimated to eat over one thousand mosquitoes per day.  People also love these birds because of their delightful calls and their graceful flight. 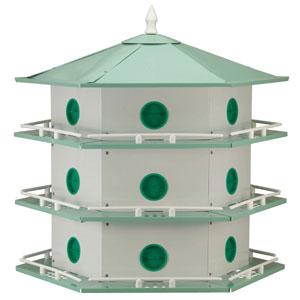