A bluebird house is most commonly made of wood and usually attached to either a fence or tree. The bluebird is one of the more skittish bird species, so it's important to place your bluebird house close to a natural bird habitat to encourage nesting. Our bluebird house collection offers a number of styles and designs, from red-cedar villas--ideal for a whole family of bluebirds-- to the more modest, yet popular, driftwood boxes. Most bluebird houses also come with drainage holes and are predator-proof.

Have questions about our bluebird house selection? Then just give our knowledgeable customer service staff a call and they'll help you pick out the bluebird house that best fits your needs. 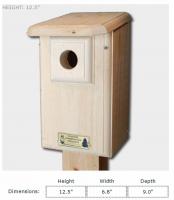 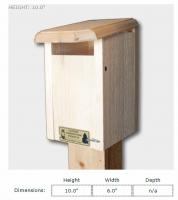 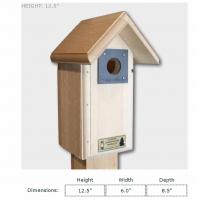 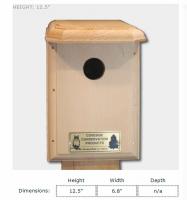 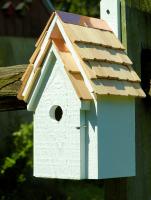 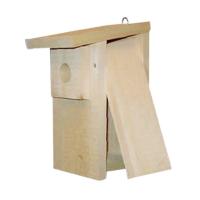 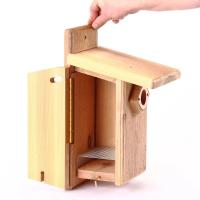 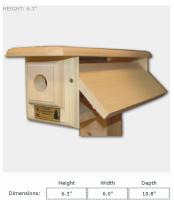 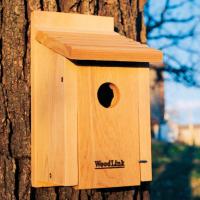 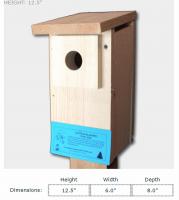 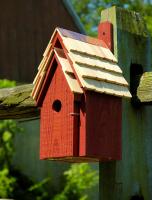 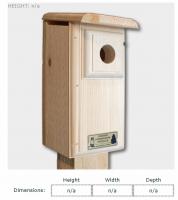 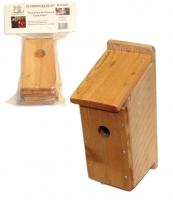 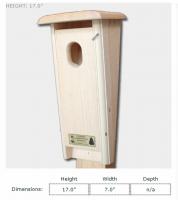 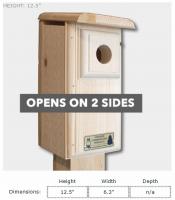 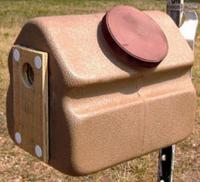 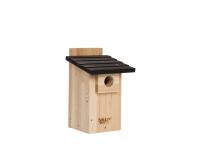 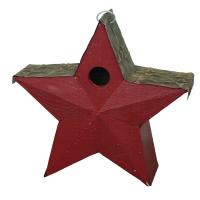 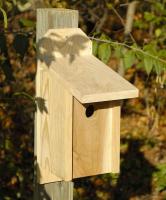 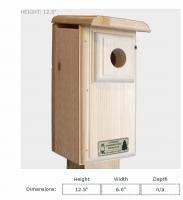 This is the 2nd Birds Choice bluebird house I have purchased. I have had the first for 10 years. The house is very well built and durable. I do enjoy the view and clean access doors. I don't have experience with other styles, but I know that I love the ease to clean on this one. Once the babies fledge, I open the clean side and just wash it down with the water hose, wipe it out, and let it dry a couple of days before closing up again. I have had bluebirds and others use the box. I wanted the 2nd box so that I could have more activity at the same time. Attractive, well built, nicely featured box.

From my perspective, this is the best shaped bluebird house. It not draw draws bluebirds, they safely raise many families of bluebirds each season. This is the fifth one we have purchased...this time it is a gift. The bluebirds love to sit on top of it with the whole previous family sometimes. Their nest is built in the very back behind a low partition. The front portion seems to allows other bluebird family members to visit inside while mom is on the nest. Great design!

I bought a similar nestbox also by Heartwood about 10 years ago. Although the National Bluebird Society recommends a box much simpler, bluebirds seem to prefer prettier homes like this...home to dozens of fledglings. Since that box started showing its age I bought this one this winter and the bluebirds took to it immediately. On March 13 a couple started their routine signaling the beginning of a new nest. Also Backyard Chirper's customer service is excellent!

The first one I received as a gift and I liked it so much I am buying a second one to put up as I have room. I love the cedar and the viewing doors. After awhile the wood dries and the doors get looser but I just put a cork between the house and the pin. My bluebirds love the house and have raised many bro is a in the first one.

Replaced a really old, well-used, blue bird house with this new one. The previous family was hesitant at first, but eventually moved right in, in time for their new brood.

Well constructed, the labelled doors reminding which one is to view was a good idea.

This past summer Violet-Green swallows used the blue/gray version. Next summer unless the color matters I'm sure the swallows will nest in the redwood version. It helped that the southeast facing portion of my house on which they are hung looks like a 28 foot tall cliff face.

It put together pretty well, for two old people. It looks nice on the fence corner post.